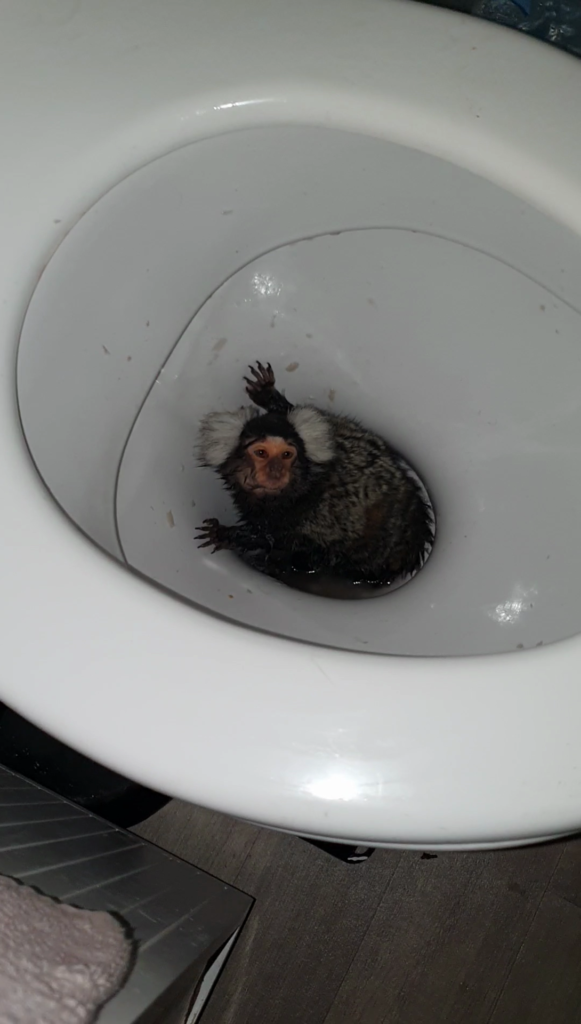 Last week, Vicki Holland was charged and convicted of three breaches of Section 9 of the Animal Welfare Act and sentenced to a 12 week suspended sentence, £600 fine and lifetime ban on keeping animals. Monkey World rescued the abused pet marmoset Milly, and have been caring and rehabilitating the tormented marmoset since.

Milly’s case was one of the worst Monkey World has encountered in over 30 years of rescuing primates. The legal UK pet trade has long been a problem, and Monkey World’s campaigned for many years to change the laws to stop monkeys suffering alone in bird cages in private homes. Whilst all 120+ monkeys rescued from the UK pet trade by the centre have arrived with physical or psychological issues due to ignorance and / or neglect, Milly was also wilfully abused and subjected to unbelievable cruelty.

The team were shocked when asked to review footage filmed by the owner and confiscated as evidence by the Newport Police, which showed Milly being tormented and chased by a dog, egged on by the owner. The poor marmoset was huddled in a corner, clearly terrified, with no means of escape. Worst still was the footage of Milly in a toilet bowl, scrabbling for hold and trying to escape, whilst off-camera people laughed, and shockingly then flushed the toilet. Milly was also offered cocaine in shocking video clips that were taken from the owner’s own phone.

Milly arrived at the park in January 2020 and the lack of trust she showed in people was heart-breaking. She hid at the back of the enclosure and alarm called whenever a member of staff passed by the enclosure.

Gradually, the primate care staff gained Milly’s trust, helped by pairing her with another common marmoset rescued from the pet trade, Moon. Moon was quick to dash to Milly’s side to reassure her when she became alarmed- tragically all too frequent for this traumatised marmoset. With Moon by her side, Milly gained confidence in her surroundings, and began to enjoy her new home, friend, and spending time outside in their large enclosure hunting insects; a far cry from her previous life, suffering alone indoors.

Dr Alison Cronin, Director of Monkey World, was asked to provide witness testimony for the court case against Milly’s owner.

Dr Cronin said “Milly’s case was tragic and heart breaking. She spent her life living in fear and was subjected to abuse and cruelty that is the worst that I have seen in more than 30 years of rescuing primates. Milly will never fully recover from her abuse and will be psychologically damaged for the rest of her life but the key to saving Milly was companionship of her own kind. With Moon at her side, she has been able to relax and enjoy her life, finally.”

Team Leader of Small Monkeys, Steph Sawyer, said “Rehabilitating Milly has been a long process. I have never seen such a terrified marmoset. Milly cringed away and hid from every person she encountered, any loud noise or sudden movement would sent her into a screaming alarm call and looking for somewhere to hide. She wouldn’t move or eat in front of us to begin with; only freeze and hide. Even now that she is settled and happy with a male, the sight of new people can still cause her to panic. The mental scarring from her abuse will always be with her.”

At Monkey World, Milly has a home for life, and people who she can trust to care for her with her best interests in mind. With the companionship of marmoset Moon, and the correct specialist housing, she is finally happy and content.
If you’d like to support the care of Milly, and others like her from the UK pet trade, you can donate to Monkey World’s fundraiser here:

8 fall hiking safety tips for your next adventure