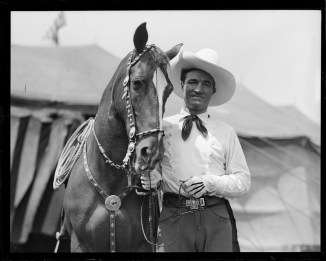 A Leap of Faith – EQUINE Ink

One of the most famous shots from old cowboy movies is the leap across the canyon for the movie Three Jumps Ahead, released in 1923, featuring Tom Mix and his excellent horse Tony. Mix, born in Mix Run, Penn., on Jan. 6, 1880, was Hollywood’s first Western megastar and is credited with defining the genre for cowboy actors. He  appeared in more than 300 films (counting “shorts”) from 1909 to 1935 and was known for

The photo above was used in the publicity stills for the movie Three Jumps Ahead. While the final film has been lost, several stills of the jump are owned by collectors. The big question — even at the time — was whether the jump was really performed and, if so, if it was done by Mix or another stunt actor.

Certainly, contemporary interviews believe it happened, although it was questioned.

“In his latest story of the western plains, Mix mounted, leaps a canyon 20 feet wide and 90 feet deep, undoubtedly the longest and most daring leap ever performed by a screen star.” The Palladium, Benton Harbor, MI, 7/7/1923.

“And the crashing climax – Tony’s very remarkable jump across a yawning abyss with Tom Mix on his back – is startling in its realism. There’s no fake to this scene. No possible way it could be faked. And besides, faking scenes is beneath the dignity of Tom and Tony.” The Democrat, Washington, IN, 6/5/1923.

“This is the picture that caused the accident insurance people to cancel all the policies of the redoubtable cowboy when they learned of the stunts he had mapped out to put into the creation. The horse Tony was assigned also a part that simple stood out by itself. The jump of the horse and rider of a yawning chasm has never been equalled in the realms of picture making. It was this stunt which even the Fox people thought too daring for Mix, which caused the cowboy and his insurance people to part company: Three Jumps Ahead is simply the last word in action.” Arizona Republican, Phoenix, AZ, 5/6/1923.

There were rumors that it was one of several stuntmen: Ed Stimpson or Richard Talmadge (who at one point claimed to have made the jump riding a horse named Ranger) or Andy Jauregui. There were even rumors that a stuntman died attempting the jump . . . or that there was no jump at all — that Mix and Tony rode across a bridge that was removed from the print (although that would not have resulted in the appearance of a jump). Another source claimed that several riders performed the jump over many days to get the right shots.

“On Monday,” said Tom, “I drove a stage coach and four horses over a 100 foot cliff. All rolled to the bottom but no one was hurt. Tuesday, I jumped Tony over a twenty foot chasm that spanned a ninety foot drop. To get the best possible angle the stunt was repeated five times but still there were no injuries. Wednesday, I rolled down another cliff with Tony and neither of us were scratched. Thursday, being a legal holiday, I stayed at home with my family. Friday morning, I went to see a doctor to be sure that I was in perfect condition.”

My feeling is the jump was probably real. Back then, stunts were a lot more dangerous than they are today (and remember those diving horses in Atlantic City?). Certainly to ask your horse to take that kind of leap requires a great deal of faith and a horse with some real jumping talent.