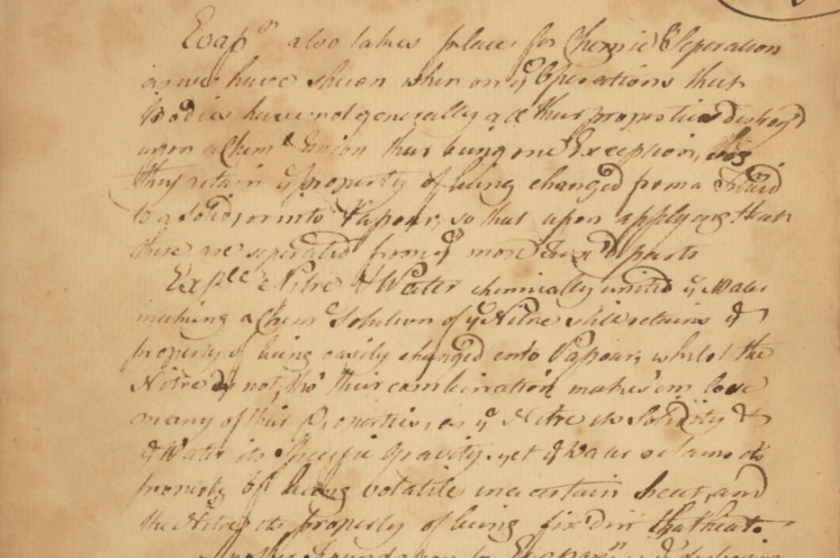 A Secret Language: The Perils of Transcription

The task of producing typed transcriptions of handwritten texts involves familiarity. Often on first glance 18th and 19th century handwriting is discouraging. It doesn’t want you to read it. But once you take some time looking closely at each word, you come to know the writer and how he or she shaped certain letters and words. Once you and the writer understand each other, transcription begins to gather speed. Below is a page of handwriting which, over time, became perfectly understandable to me.

The transcriber is happiest to come across handwriting that is steady, clean, and perfectly legible producing not one ounce of perspiration. I found such a paragon in the collections of the National Library of Medicine in a notebook, perhaps from a lecture or kept as reference material, by an unknown author. Here is a part of page 13 in MS B 346: Materia Medica, ca. 1750:

But sometimes, those wonderfully legible passages are interspersed with myriad eccentric characters and shapes best known to alien life forces. When Phlorg is out in another part of the galaxy, deciphering falls solely on the transcriber. The characters I encountered are shorthand. This practice of making handwriting quicker and more efficient has been used since antiquity. However, there are a plethora of systems which took hold in different centuries, eras, and languages. The particular shorthand system in question, besmirching the entirety of MS B 346, eluded my ability to find its systemic key.

Below is a sample from page 17.

Of the various systems of English shorthand commonly used in the 1700s, I came across none that approximated the gibberish I had to decipher. The few systems I found were more focused on letters and partial words. Not only did the symbols in these systems not match those I faced, but it was clear to me that many of the characters I saw represented whole words, not letters. So, at the risk of being embarrassed in the future by someone presenting me with a concise glossary of this shorthand system, I undertook to decipher it myself.

The first few successes were encouraging. Context made it easy to tell what symbols were used for “the” and “is”. After that, things became trickier. When I found a certain shape recurring and couldn’t easily figure its meaning, I collected a series of instances in context and hoped that eventually I would find the one word that fit all those “blanks.”

Here is how the word “keep” was wrested from the world of doodles:

Eventually, I learned that most of the symbols stood for prepositions, articles, and regularly used small words. I tried to group the similar shapes together, hoping that there was some meaningful relation in the variations of a particular shape. As seen here, that theory has its faults.

So, after I was satisfied that each squiggle stood for a word, I found clearly handwritten words with squiggles appended to them, which upset the entire system. They were not whole words! In time, I determined that they stood for common end parts of words.

Then, just to taunt my smug sense of success, the author threw in compound words made up entirely of symbols. “Be” and “become” presented their inscrutable selves frequently.

Finally, after I figured all these things out, the writer declared victory by scribbling several shapes, lines, and loops and using them only once or twice. I couldn’t find enough uses in context to learn what they meant, and as the author smiled from the grave I transcribed them as “[illegible]”.

And so, in conclusion, the transcription is still imperfect, and some otherwise legible information is lost—but I claim partial victory!

For those dedicated decoders among you, here is a scan page 123 from Materia Medica (MS B 346) along with a deciphered transcription:

a stim: and used instead of Vol: Alk that which it is
slower and more lasting though heating
[Stechus] Arabica or
it is said to participate the virtues of the order.
the [marjorana] Origanum of Lin: sweet Margoram.
a pot herb. a warmish aromatic bitterish Taste
a mild stimulating aromatic and used as one of
the Ingredients of the Pulvis Cephal: as a milder Sternatutory
its distilled Water has been used for
the same Purpose, it has a strong smell though little
Taste
the Wild Margoram Origanum.
it is more stimulating though not so fragrant, its
Essential oil obtained by the watery Distillation
is so very acrid and penetrating that it is used to destroy the Nerves
in a Caries of the Tooth Oil of Origanum.
Dictamnus Creticus. Dittany of Candy, or of Creta
stimulating to a strong Degree and aromatic, Uterine
deservedly commended in hard labor. Diagor:
we hardly even have it here fit for use. the antients
are extravagant in its Praise.
the Marum Vulgare common Herb Mastick. the Mastichum of Lin:
subacrid arom: Taste agrees intirely with the Order.
the Saturia Hortensis of Lin: the Summer Savory.
the Med Virt: the same as the Order.

And here is part of my hard-won guide to deciphered symbols:

James Labosier is Associate Curator for the Archives and Modern Manuscripts Program in the History of Medicine Division at the National Library of Medicine.

Reimagining interior design trends from across the decades

Sweet and Salty recipes for some spooky halloween fun