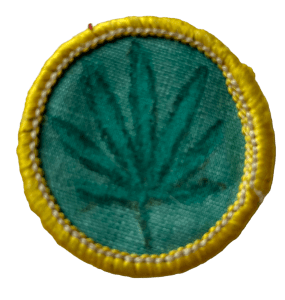 Today, voters in five states will determine whether or not to decriminalize marijuana use by adults age 21 and older. To date, 37 states and the District of Columbia have passed similar laws.

The legalization trend has had unintended effects on the Girl Scouts, especially Girl Scout cookies.

Not words you often see in close proximity.

The Girl Scout cookie program is not a fundraiser, in official Girl Scout materials, but a way to foster entrepreneurialism in young women. Ahead of sales, troops set sales goals, apply for cookie booths (usually assigned by lottery), and create their own decorations, slogans, and signs.

As legal marijuana dispensaries opened across the country, a few Girl Scouts did their research and saw an untapped market.

In 2014, a San Francisco Girl Scout set up a cookie both outside a medical marijuana dispensary and did a booming business. Pre-Covid, a Chicago troop used a similar location. Last year, the pot and cookies combo came from Walled Lake, Michigan. Weekend cookie booths outside the Greenhouse of Walled Lake establishment sold more than 1,000 boxes.

When these news stories began to circulate, GSUSA stepped in. They had no problem with the booth locations. But selling products bearing the Girl Scout name was another matter.

For many years, “Girl Scout Cookie” has been a popular strain of marijuana. So long as the botanical remained banned, Girl Scout officials chose to ignore the trademark infringement. Any legal action to prevent use of the name would only give publicity to the offending product.

But with legalization, the issue had to be addressed. The increased access to marijuana “edibles” crossed a line. Baked goods are Girl Scout turf. GSUSA released the following statement in 2017:

We were recently made aware of local dispensaries using the Girl Scouts trademarked name, or a variation of our trademarked name, to sell their products. In January, dispensaries in California were issued a cease and desist letter from Girl Scouts of the USA for trademark infringement and have removed the product in violation from their shelves. “Girl Scout Cookies” is a registered trademark dating back to 1936. Our famous cookies are known the world over for their delicious flavor and we do not want the public to be confused by unauthorized products in the marketplace.

Representatives of the marijuana industry were not alarmed by the cease-and-desist letters. “We knew it was coming,” admitted the executive director of the Magnolia Oakland dispensary.

We come from the grow room, not business college. There’s a learning curve to business practices and we are becoming more sophisticated lately, but it’s something people should’ve known, there’s no excuse.

This isn’t the first time the Girl Scouts took action regarding marijuana.

When the 26th Amendment to the US Constitution, enacted in 1971, lowered the minimum voting age from 21 to 18, the Girl Scout program offered initiatives that would help girls to become informed voters. One initiative convened fifty years ago.

In 1972 the Girl Scout Council of the Nation’s Capital sponsored “Petticoats, Pot, and Politics,” a Wider Opportunity (Destination) for Senior Girl Scouts. One hundred girls aged 14-17 from across the country joined 25 girls from Nation’s Capital for two weeks of political debate at Trinity College in Washington, DC.

The local delegates helped design the program, selecting current issues with particular relevance for teens.  They passed several bills, including one requiring sex education to be taught in school, but defeated a proposal to decriminalize marijuana, instead calling for possession to be reduced from a felony to a misdemeanor.

The experience ended with a reception at the White House attended by First Daughter Julie Nixon Eisenhower, who declared that she agreed with the girls’ position on marijuana.

Girl Scouts–at the forefront of change.

How to build a basic shelter in the wilderness – SurviveUK