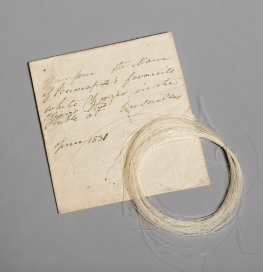 Painting of Napolean’s Charger, Marengo, to be Auctioned by Christie’s – EQUINE Ink

A painting of Napoleon’s famous battle charger Marengo, produced during the stallion’s lifetime is among an Old Masters sale at Christie’s in New York on January 25th. Titled Marengo, Napoleon’s Barb Charger, the work was painted by London artist James Ward in 1829. It is estimated to sell for between $250,000 and $350,000. It is only the third time the work has been offered for public auction.

Marengo was a grey Arabian stallion originally imported to France from Egypt as a 6 year old, as a gift to Napoleon from King Victor Emmanuel I of Sardinia. Although only 14.1 hh, Marengo was known to be steady and courageous — and fast: he was frequently used in the 80-mile gallops from Valladolid to Burgos, which he completed in just five hours. He quickly became the emperor’s favorite mount and carried him into several battles (including the Battle of Marengo, for which he as named) and the Battle of Waterloo. The stallion was injured eight times, and even survived the retreat from Moscow in 1812.

In history books and in contemporaneous accounts, Napoleon is described as an intrepid rider who usually rode stallions at breakneck speeds. On horseback, nothing worried him and he galloped with a sense of daring and freedom at odds with his otherwise methodical approach to war. Concerned with the welfare of his horses. Unusual for the times, Napoleon forbid his soldiers from docking the tails of their horses, a practice then prevalent as cropped tails saved effort in grooming, but did little to prevent horses from keeping away flies.

According to the Mémoire of Madame de Rémusat, lady-in-waiting to the Empress Josephine,

All horses ridden by Napoleon had to be both courageous and able:He rode competently but without grace. Arabian horses were trained for him; he
preferred them because they could stop suddenly. But as they also started suddenly, and as he held his bridle loosely, he would often have fallen if the
necessary precautions had not been taken. He liked to gallop down steep slopes, at the risk of breaking the necks of those following him. He had several falls which were never mentioned, because it would have displeased him.

After Napoleon’s defeat at Waterloo, Marengo was captured by William, 11th Lord Petre, and sold to Lieutenant-Colonel Angerstein of the Grenadier Guards. Although he was a dud in the breeding shed, he was quite an attraction in England. Few could believe that this small horse had been the personal mount of the great emperor, but when went on show in Pall Mall, he drew crowds who wanted to see his battle scars. Although renowned for his fearlessness during battle, he was described as being “so gentle that the most timid Lady may approach him without fear.”

Marengo died in 1831 at age 38, and his skeleton is displayed at the National Army Museum in London. The skeleton was recently restored; work that can be seen in the video below.

Back to the painting! The painting being auctioned off by Christie’s is 28″ x 35½”. It is the only known version painted by Ward of a slightly larger (32 x 43 in) work, dated 1824 and exhibited at the Royal Academy in 1826. The earlier picture was probably intended to counterpart Ward’s portrait of Copenhagen, the charger ridden by the Duke of Wellington at Waterloo, dated 1824 and exhibited at the Academy the same year. These two pictures were among six portraits of celebrated horses acquired from the artist between 1820 and 1826 by Hugh Percy, 3rd Duke of Northumberland. In the Northumberland version of Marengo, a setting sun to the right of the composition – where the horse gazes – is seemingly a metaphor for the end of his master’s 12 years of military campaigns.

London-born Ward was an engraver and painter, mostly of animals, who as his career advanced specialized in painting horses within landscapes. Like many artists of the time, Ward sought commissions from the wealthy gentry of their favorite horses, their favorite hunting dogs or their children. He suffered a stroke in 1855 could not paint, and died in poverty.

Asking for feedback on job applications: attitudes and practices